Audrey Nuna is a hip-hop artist whose fresh take on the genre — a vision she began to shape upon being discovered four years ago — warrants a playlist addition for any fan. But less than a year ago, Nuna said listeners would be hard-pressed to find any information about her with a Google search.

Nuna realized her need for a name change when it became apparent that the mononym didn't allow for much online discovery, a challenge for an up-and-coming artist. "It was too hard to find me on the internet," Nuna told PAPER. "It legitimately took me one year to pick a name. I hated everything I came up with."

Then her brother called her Audrey Nuna; it wasn't out of the ordinary, as he had called Nuna such for years. But something clicked, and nuna, a Korean word which translates in English to "older sister," became more than a name or a title. Rather, it is now part of Nuna's artistic identity. 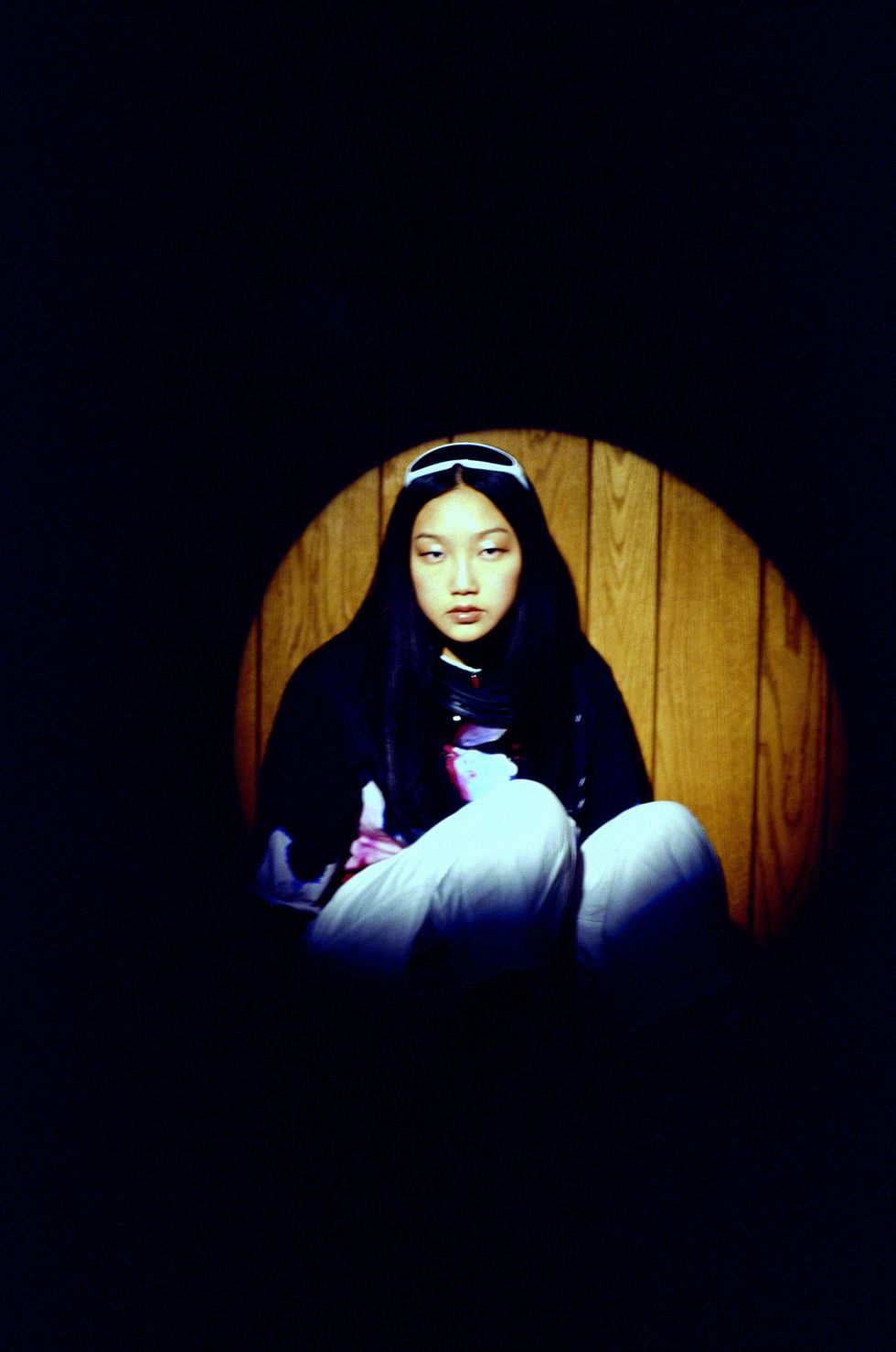 Though the change alone may have contributed to a more seamless path to search results, Nuna's increased likelihood to be found online is likely also a product of her early success on the scene. Nuna's name re-introduction is only one reflection of her artistic evolution within the last year.

Enter: "damn Right," her latest single following up a year of tracks including "Time" and the Jack Harlow-featured "Comic Sans," both of which racked up between one and three million streams since their releases. The satirical take on "flexing" is a high-energy bop that takes on the common desire to show off with honest and witty lyrics to match, like "Damn right, she stole that Bacardi/ Damn right, he drive fake Ferrari/ God damn, it ain't even a party without you flexing that Murakami."

From self-styling to creative direction based on sonic energy, "damn Right" showcases the best of Nuna's artistic traits and unapologetic individualism, designed with collaborators that share her vision for a dynamic creation.

PAPER caught up with Nuna to discuss the newfound limitations on collaboration in the age of the pandemic, her growth since she hit the scene and the creative process that produced the track and visual for "damn Right."

How are you? What have you been up to for the past few months?

At this moment in time, I'm overwhelmed. I just went to see Tenet and my brain is liquid. Past few months, I've had a normal sleep schedule for the first time since high school. Been making music, making videos. Quarantine's been almost like a second chance at childhood. I go outside way more and I'm reading again.

You haven't stopped working during quarantine. What is the experience like to create with these new limitations, particularly on in-person collaboration?

It's challenging as hell. I've realized that in-person collaboration is my favorite thing about creating — getting to know the people, getting pizza with them, seeing the posters and trinkets people keep in their workspaces. Fuck Zoom sessions, they are trash. But we're out here.

The pandemic is just one part of a four-year music journey for you. How do you think you've evolved in your artistry since you were discovered at 16?

The sound and visuals have evolved, but I feel and think the same way about creating as I always have. I don't feel less excited or reserved about trying shit. I'm way better at communicating the ideas and sounds in my head. 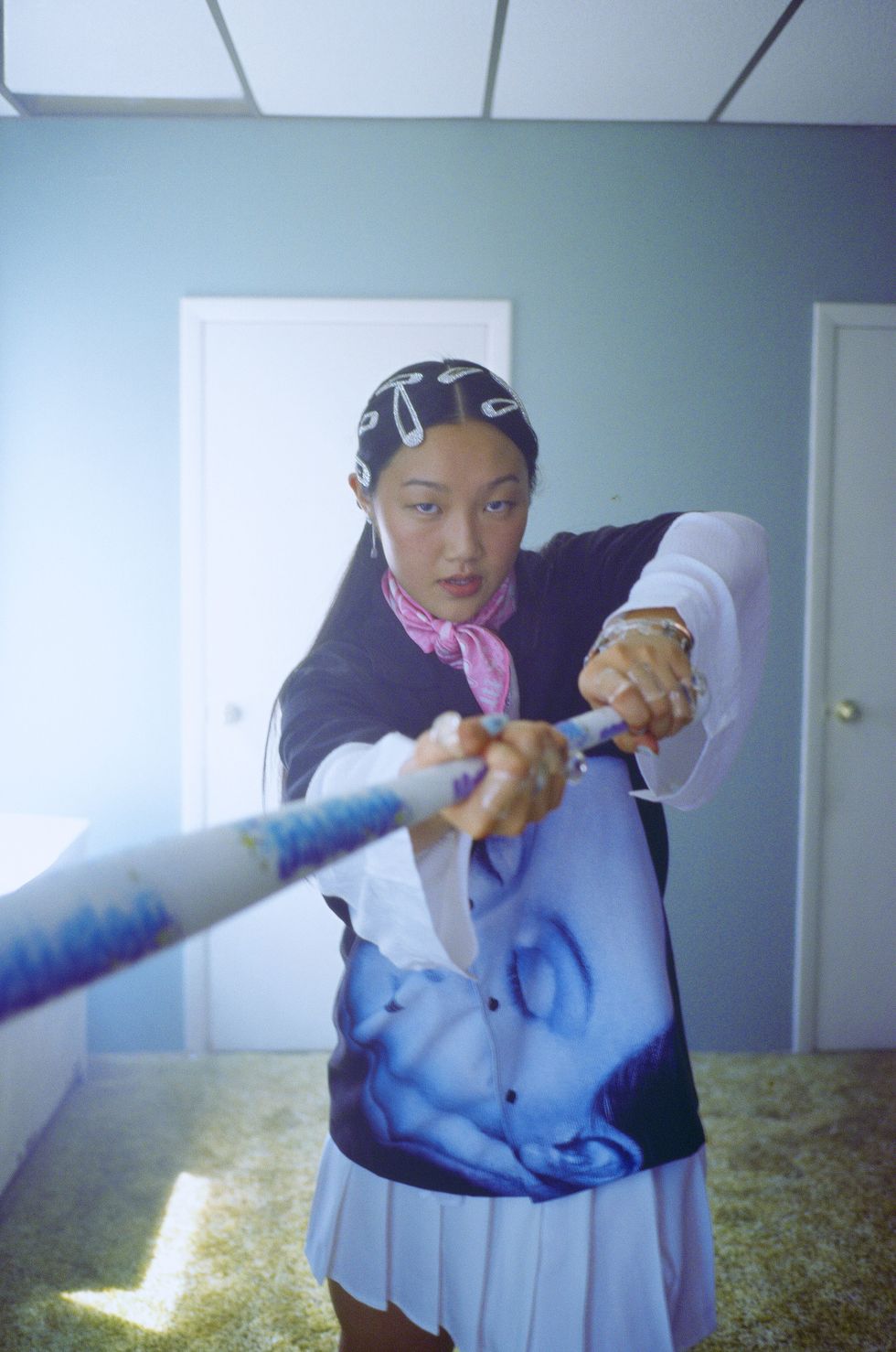 Your name has evolved, as well. Within the last year, you made the move from Audrey to Audrey Nuna — what inspired the change?

It was too hard to find me on the internet. It legitimately took me one year to pick a name. I hated everything I came up with. I was in my mom's kitchen one day and my brother called me "Audrey Nuna" as he always has (nuna means older sister in Korean) and it clicked because I've been hearing him call me that since he was a baby.

Speaking of change, let's talk about writing. How has the songwriting process evolved for you over the years?

It's always been a shit show. I've always been melody-driven, though. The trap of overthinking shit is a little more present because of the fact that before I was just trying to start and now I have this ambition to get better, which honestly screws me over at times because some of my favorite things I've made were the most effortless.

The process is clearly working out, and your track, "Time," was a streaming hit. How would you compare "Time" to the sound and lyricism of your new single, "damn Right"? 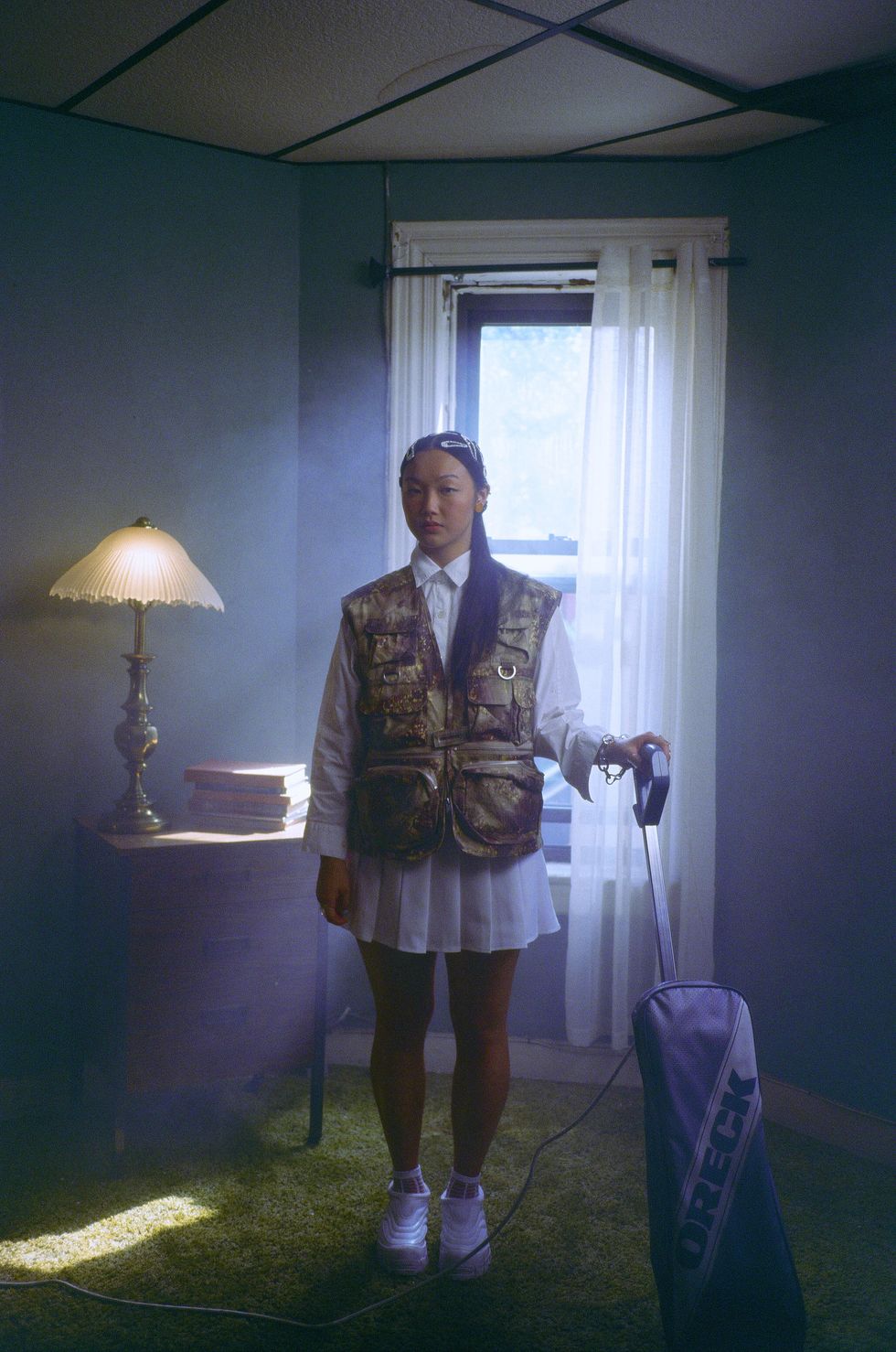 What was the creative process on "damn Right"?

Nate, the producer, and I met that day. We got tacos, talked about Rick Rubin. He made the beat in 10 minutes and I put down a scratch, finished it when I got back to the east coast. It's a satire about gossip and flexing and human nature.

Which lyric on "damn Right" speaks to you the most? How did it make it on the track?

"Saying plastic on my wrist and they're damn right." I own a lot of plastic/acrylic jewelry. I wear what I like, I don't care if it's cheap. On the flip side, I don't buy or like clothes any more just because they're expensive.

You filmed the music video for the single just weeks ago (and you incorporated a mask shot)! How would you describe the socially distanced video-making experience for "damn Right"?

[Laughs] That wasn't even on purpose. The shoot was one of my favorite quarantine days. It was strange only seeing the upper portion of the crew members' faces. I really miss seeing strangers' full faces, not just the eyes. 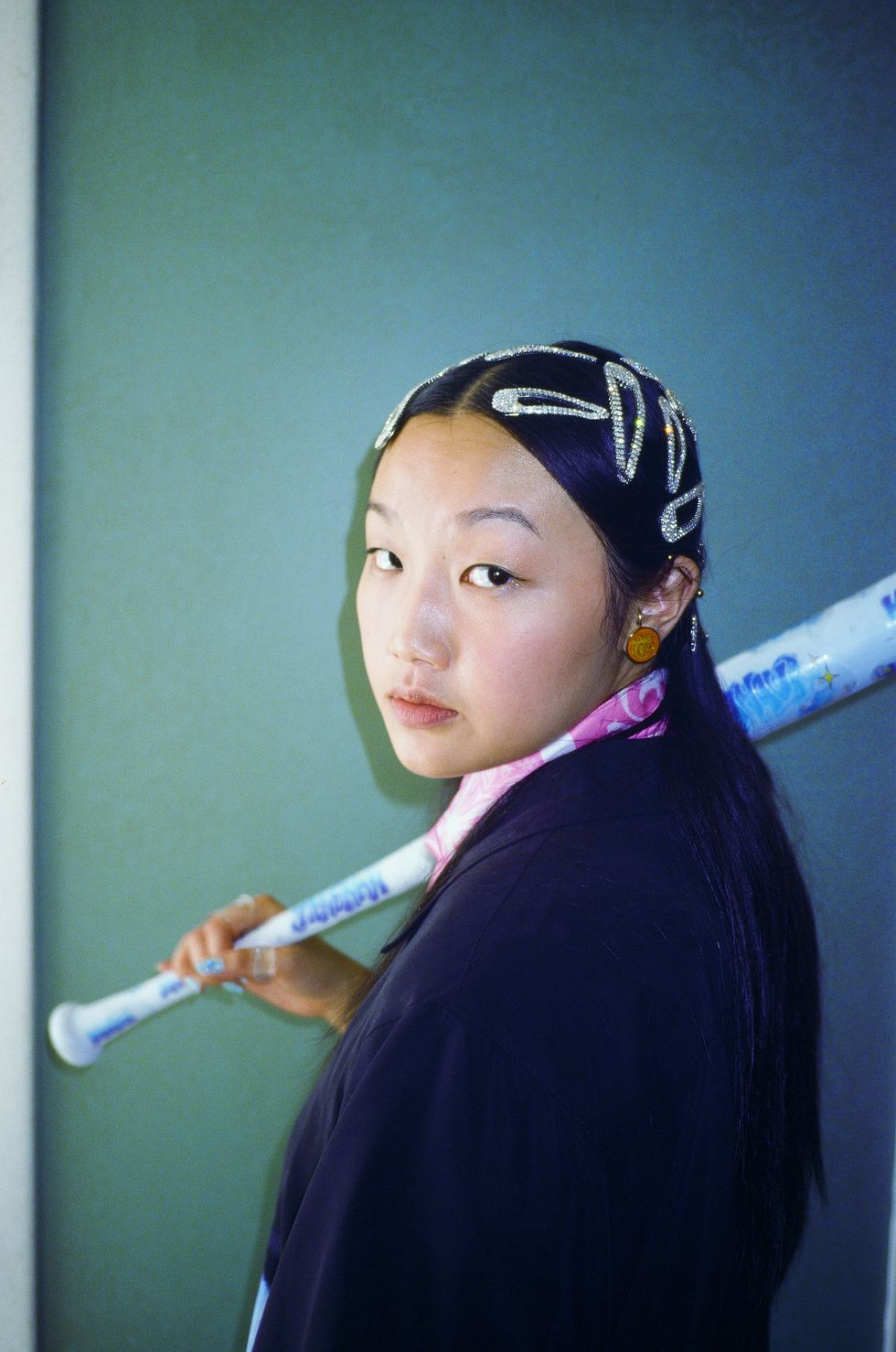 What inspired the creative direction for this visual?

We just bottled the energy of the song. The beat is fat, we wanted the video fat. My friend Lolo directed this one and one of the first ideas he sent me for the treatment was the scene was the bathtub of barbies. We built around that energy.

How was this visual styled? Did you have a role in it?

I style/styled myself. I was thinking about working with a stylist, but they didn't get back to me in time. I had the best time though; I want to continue doing it myself. My personal favorites from this video was the pink bandana fit and the baseball bat fit. Shoutout to Bobby Day for the jean sleeves in the trophy scene.

As far as what comes next, this is the latest single from your upcoming EP. What can listeners expect?

Expect nothing because it's more fun that way. I'm stoked to get to do this shit and I'm very excited to live more life and go more places and report what I see to all of you.